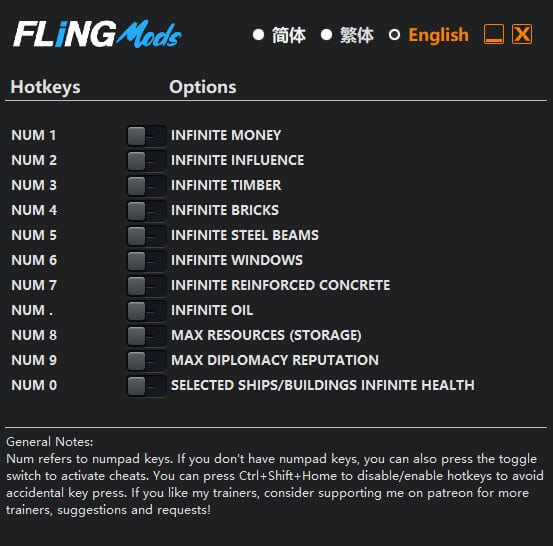 To build a family in a medieval world might not be an easy task, especially with the roaring bears and wolves and the extremely harsh winter. The Medieval Dynasty trainer has features to ensure that you come out prosperous with a successful, thriving dynasty at the end.

You need health to survive the harsh world as you build your dynasty. The trainer offers you an unlimited health status.

At the onset, it is you against the world as you try to survive and build your family and village. You need unlimited stamina for that.

A player can add about 1000 selected items to ensure that his dynasty is thriving and safe.

Food will fuel your body for greater works ahead and saves you the stress of hunting for food to survive.

What’s the need of building at a slow rate when the weather and wild animals are on you? Set your game speed to suit your preference with a trainer.

With the trainer, you have enough water to last you and your dynasty.

The Medieval Dynasty trainer has a cheat that keeps things neat for you. With lots of activities happening at once, keeping your surroundings clean can be nearly impossible.

Enjoy durability in every level of the game you are playing.

Medieval Dynasty requires a super-maximum weight if you must carry out the tasks ahead of you.

In the Medieval Dynasty, a player is a young man who ran away from the crazy war that has refused to end and decides to live alone. To build a prosperous dynasty as a poor and inexperienced young man can be a daunting game challenge. You have to defend against wild animals around, hunt for food, construct equipment, gather resources, and build a village.

Medieval Dynasty allows you to survive, hunt, build and lead Europe in the crude Middle Age. The game is filled with greed, distrust, and envy as clergies and nobles fight for dominance. To compound the woes of the player, military conflict is not helping the changing continents.

With a Medieval Dynasty trainer, you can withstand tough weather conditions and unexpected crises that affect your dexterity and skills as you create your legacy.

Why Use Medieval Dynasty Trainer?

The Medieval Dynasty is a medieval 3D landscape video game that requires a combination of different successful genres that include survival, simulation, role-playing, and strategy. The need to carry out these genres is something that might not be easy on you, especially for new players.

While pioneering a village in the Middle Ages might look simple on paper, the process is no near a simple thing in the medieval Dynasty. The trainer makes the building and safeguarding the villager easier for you.

The gameplay is impacted on endurance health, water, and food status. With the game trainer, you can edit the game to how you want it. You save time and stress by struggling to make things work out for you.

How Does The Trainer Work?

The Medieval Dynasty can become more exciting with the game trainer. Die-hard players and developers of the game designed the trainer as a third-party program. The trainer has simple shortcuts and a series of keyboard letters.

One can download the trainer with just a click. Furthermore, the installation process is quite straightforward. Then, you need to run the trainer program and select the game Medieval Dynasty. The trainer is compatible with Windows 7, 8, and 10.